"Oh make me over
I'm all I wanna be
A walking study in demonology..."

"It took every last ounce of Sam's willpower not to look at Rachel, to pretend that he didn't hear the light beat of her heart from across the church or smell her sweet, inviting scent.

"Every part of him wanted to hold her to his chest and not let go.

"The scariest thing was that he hadn't decided to kiss Rachel, his body had, taking control in a way he'd never experienced before. Even now, as he gritted his teeth, he wasn't sure he'd be able to keep himself away from her.

"He tried to make sense of what it meant, and then decided it didn't matter. He had to stay focused on his next bounty, which at this point looked like it would be Azazel."

Just like the first book in this series (which I read over a year ago), Every Demon Has His Day, this book is silly, goofy fun that combines chick lit with paranormal romance and horror-comedy. The heroine is Rachel, a young mom whose husband's body has been taken over by a demon named Pan. Pan is the father of Rachel's one-year-old son Cassidy, and the half-demon child (while not himself evil) exhibits some very unusual mischievous behavior. After the demon-husband unceremoniously splits, he's tracked down by the novel's hero, a fallen angel named Sam. Aligned with neither good nor evil, Sam is gradually becoming a mortal man, although most human women still find him irresistible. Rachel is not one of them. She's strongly attracted to Sam, but her primary concern is keeping Cassidy safe as Pan helps to waken Azazel, a very dangerous fallen angel who's planning to take over hell itself. The novel has some ridiculous scenes, such as the giant toddlers who descend on a Walmart-like parking lot and the angel SWAT team, so just go with it. 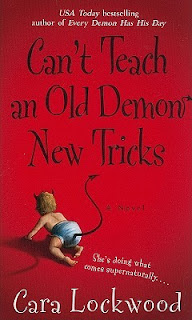 Azazel: In Lockwood's telling, Azazel is a very powerful fallen angel who's been entombed in the Grand Canyon for thousands of years. He's high on the devil's most wanted list because of his scheme to take over hell. To do so, he has in the past attempted - and plans to try again - to sire a race of giants (the Nephilim) by seducing and impregnating human women, who die giving birth to his monstrously large offspring.

According to the Jewish Encyclopedia, Azazel is mentioned in the Bible. In the book of Leviticus, the ritual of the Day of Atonement is described, including the priest laying hands on a goat - the scapegoat - and confessing all the people's sins over it. The scapegoat was then released into the wilderness "for Azazel." The Book of Enoch (which most Jewish and Christian denominations do not consider to be a canonical part of the Bible) associates Azazel with the fallen angels, but other commentators consider Azazel a local deity associated with isolated stretches of the desert. 'Enoch' casts Azazel as a Prometheus-like figure who teaches humankind how to make weapons and wear make-up, among other things.

Folklorically, Azazel is associated with the angels mentioned in the Biblical book of Genesis who made children with human women (Genesis 6:1-4).

Azazel is also a Marvel Comics character, a mutant. In X-Men: First Class he's played by Jason Flemyng. Flemyng's co-star in that film, Michael Fassbender, played a character named Azazael on the U.K. TV series Hex (which I used to watch back when I had cable). Azazael was a fallen angel, and he fathered a child with the heroine-witch Cassie. Their son, Malachi, grew unusually fast and had demon-like powers.

Casiphia: She seems to be a demon Lockwood invented entirely. She has a lot of lust directed at Azazel, which he seems to return, even though it does not slow down his plan to impregnate a lot of human women, including many of the young beauty queens at the Dogwood Festival. She takes the form of a beautiful woman, and she has the ability to poison both humans and angels with her claw-like fingernails.

Casiphia is briefly mentioned in the Bible (Ezra 8:17), not as a demon but as a place. The Jewish Encyclopedia says its exact location is unknown (the entry is here).

Lilith: Lockwood describes Lilith as living in the form of an enormous snake. Her home appears to be a pet store, where she is attended by a human-looking demon, but any human beings who wander into her pet store by mistake are killed. Lilith is embittered against the human race because her demon children were killed, while humans are able to multiple. Otherwise, she's the traditional folkloric Lilith: first woman created, refused to be subservient to Adam, flew from the Garden of Eden and gave birth to many demon children by seducing men in their sleep.

When I think of Lilith, I can't help but think about an opinion column I read years ago, and still have affixed to an old diary. On Thursday, June 24, 1999, Ellen Goodman (a Boston Globe columnist) published "Lilith Too Much Woman for Adam (or Jerry)." In it, Goodman discusses the National Liberty Journal's (associated with Jerry Falwell and infamous for speaking out against the Teletubbies) crusade against the Lilith Fair music festival (which concluded in 2011). The charge was that Lilith Fair "celebrates a Pagan figure" known for seducing men. Goodman mentions the first printed reference to Lilith, in the 8th-9th century Alphabet of Ben-Sira. She quotes the editor of Lilith magazine (a Jewish feminist magazine first published in 1976), Susan Weidman Schneider, as saying, "The kernel of the story is that Lilith was a woman who wasn't afraid to take risks for equality. She wanted to claim her birthright as Adam's equal."

Goodman concludes, "Needless to say (I think it's needless), the Lilith Fair is modeled after the original image of the woman who wanted to have an equal voice....At the risk of sounding absolutely demonic, I'd rather sing doo-wop for Lilith than Jerry. The world according to Falwell ain't my idea of Paradise." I have loved Lilith ever since I read that, and I'm always slightly disappointed by unflattering portrayals of her.

In modern media, Lilith is often referred to as the first vampire/queen of the vampires/mother of all the vampires. Lilith as a character featured prominently in Season 5 of True Blood. You can read about the folkloric Lilith extensively at Encyclopedia Mythica.

Pan: In Lockwood's telling, Pan is a sloth demon. He's so lazy, he's almost too lazy to do anything evil, even though he's plainly allied with Satan. He kills Kevin Farnsworth, taking over his body, and fathers Cassidy with Kevin's wife Rachel. (The issue of Rachel mourning for the real Kevin is never really addressed in this book.) Then he takes off, only to be hunted down by Sam. He offers to lead Sam to Azazel in exchange for his freedom, even though Pan ultimately ends up sent to hell anyway.

Theoi.com calls Pan "the god of shepherds and flocks, hunting and rustic music." He's not associated with sloth at all. He's depicted as a satyr, a half-man half-goat, and is sometimes pictured as part of the retinue of Dionysus.

In short, the folkloric Pan is variation on the Wild God of the Woods, a common theme in European mythology. He's the Horned One of Beltane and possibly Loki among the Norse gods (and in Marvel Comics).

Tiamat: In Can't Teach an Old Demon New Tricks, Tiamat is a water demon, although it's mentioned that the ancient Babylonians considered her a goddess whose body formed the world. She's not particularly powerful; she can be contained in a Mason jar, and when that jar is emptied out she becomes a raging flood. She destroys Rachel's house.

Encyclopedia Mythica calls Tiamat a huge Babylonian dragon who personified the oceans and chaos, as well as "the mother of all that exists." Thus, she is extremely powerful and important. It says in the Babylonian creation epic the Enuma Elish, Tiamat and her consort Apsu decide to kill their many offspring, who have begun to annoy them. Their plans are foiled when one of their children, Ea, kills Apsu. Tiamat becomes enraged and builds an army of monsters, but is ultimately defeated and slain by the young god Marduk.

But every writer is free to use folkloric characters as inspiration for her own unique characters - J.K. Rowling certainly does it all the time in the Harry Potter series, and the results are enjoyable. This series isn't anywhere near as good as the Harry Potter books, but it's good for a fairly quick read with some amusing characters and funny dialogue.
Posted by Erin O'Riordan at 12:00 AM