That Which Maketh Me Happy (NSFW)

First, that Barack Obama was re-elected president of the United States. I don't care for Willard Mitt Romney. Not because he's a Mormon - I don't care what religion (or lack thereof) someone is. I just don't think he's ever been to the U.S. - he doesn't seem to know anyone here.

Second, Anne of Green Gables by L.M. Montgomery. Besides Small World, the other bookstore I went to in L.A. was Piccolo's, the one at the Promenade at Howard Hughes Center, an outdoor mall in Culver City. All the books are used, were donated and cost $1, with proceeds benefiting a literacy project. Surprisingly, I had a hard time choosing a book there, perhaps because they were only loosely organized. I remembered discussing Anne with Jenny Shaw over at Well Shut the Front Door, and I got it to read on the plane.

I didn't read it on the plane. I watched The Real Housewives of Atlanta on those little TVs Virgin America puts on the backs of everybody's seats. In my defense, I don't have cable at home, so it's not like I regularly veg out to Bravo.

But I'm reading it now. I don't plan to read the whole series, though. It's much more than a trilogy; there are at least 8, from what I could tell when I was searching for this cover. It's a good book, though. It teaches children that if you accidentally get one of your friends drunk by mistaking wine for a nonalcoholic beverage, you can make it up to her parents by saving their youngest daughter's life.
Another book-related thing that made me happy was listening to Dr. Oliver Sacks talk about his book Hallucinations on yesterday's Leonard Lopate Show. I don't think Leonard Lopate asks the most astute questions, but it's nonetheless an interesting, fairly brief (about 25 minute) interview. Listen here.

I was also excited when I returned The Lucky One to Netflix and got back The Raven (starring John Cusack as Edgar Allan Poe), the red envelope was decorated with Twilight: Breaking Dawn Pt. 2 imagery. 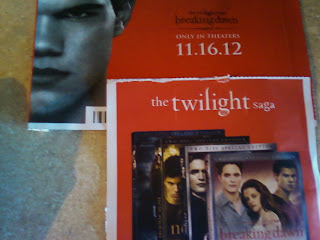 The other thing that makes me happy is Crystal Marie's blog A Word or Three, which I just discovered yesterday (while attempted to watch the now-deleted Twilight-related videos on this blog, The Latter Days. Of the posts I've read so far, two of my favorites are:

Oh, and then there's this: a version of "Bad Romance" in homage to the 20th-century U.S. women's suffrage movement. New legislation, baby!

A few days ago, I discovered that people on Tumblr had vintage nude photos of Burt Lancaster. This made me incredibly happy.

Lest you should wonder, I enjoyed John Cusack's characterization of a haunted and lovesick Poe, although I thought 'The Raven' was not a great movie overall.

I love Anne of Green Gables. I mixed up Burt Reynolds and Burt Lancaster and was thinking he looked awfully different when he was younger, until I realized it wasn't the same person (duh).

I like that middle pic of him - he looks so happy with himself.

I know, right? He looks like a guy who really liked to be naked.