I Don't Think I'm In Kansas Anymore, and Back to the Thin Red Line

I'm back from my long weekend in Manhattan - not the fun Manhattan, but the one in Kansas - where my nephew got married. When leaving Kansas, I felt obliged to say, "I don't think we're in Kansas anymore." While we never got around to visiting the Wizard of Oz museum in nearby Wamego, I chose to associate Kansas with the L. Frank Baum classic. The other literary work I associate with Kansas is In Cold Blood by Truman Capote, which is rather less pleasant.

We did drive through Mark Twain's hometown of Hannibal, Missouri, but we didn't stop there.

The paperback I carried with me on my trip of Patricia Bosworth's biography of Montgomery Clift, a cheap paperback I purchased from Better World Books. Look how neatly its yellow edges match my manicure (and the dress I wore to the wedding reception.) 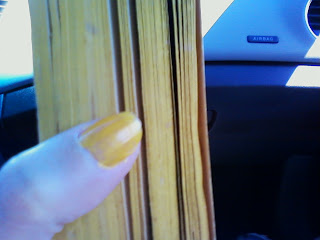 In Aggieville (the quaint shopping and pub-crawling neighborhood in the vicinity of Kansas State University), I visited The Dusty Bookshelf. There I bought my great-niece a Mickey Mouse coloring book and a picture book based on the Disney version of Peter Pan. For myself, I purchased The Vampire Diaries: The Return: Midnight.

But now that I'm back in the Great Lakes region, I'm back to reading the books I left behind, including The Thin Red Line. I'm about halfway through The Thin Red Line, the second book in James Jones' trilogy. Since I kind of cheated, in that I watched the movie before I read the book, and I've now read and watched From Here to Eternity, I feel somewhat prepared to compare the characters of Robert E. Lee Prewitt and his counterpart in the second book, Bob Witt.

You know what might be even more fun, though? Comparing the actors who portrayed Prewitt and Witt, respectively Montgomery Clift and Jim Caviezel. They have stuff in common, other than playing essentially the same character in adaptations of James Jones novels. (In fact, I now know that some of Witt's monologue in the Thin Red Line movie comes from the book version of From Here to Eternity, further fusing two fictional characters who are already essentially the same. Not exactly the same, though: Prew is 22 years old in 1941, while Witt is 21 in 1943, to name just one example of how their biographies differ. Obviously, Prewitt is dead at the end of FHTE - he never makes it to Guadalcanal.)

They both modeled during their early acting careers, for example. Clift modeled for Arrow shirts and Steinway pianos, among other gigs. Caviezel modeled clothes for The Gap. This is not a great picture, but you get the idea.

Clift appeared in a Gap khakis ad posthumously, via a still from his film I Confess.

(P.S. The nephew who got married? Also a former model, and so is his brother.)

They were both called upon to learn the trumpet, or at least to look as if they knew what they were doing with one. Clift's scene is the emotional climax of the From Here to Eternity movie: Prew's brokenhearted rendition of TAPS in Maggio's honor.

Caviezel's scene is in the romantic drama Angel Eyes. The music is forcing his character to remember a past he'd done his best to try to forget.

The other things they have in common? A perpetual tan. Intense eyes. Long, dark eyelashes that women envy; prettiness that at times verges on androgyny, but also the ability to rock a sexy beard. They're both part Irish, too.

I warn you not to stare too long, or you may end up pregnant.

Last night I watched the episode of 'American Masters' on PBS about Marilyn Monroe. Patricia Bosworth was in it. She said she attended a session at the Actor's Studio, and she and Marilyn shared a cab afterward. Bosworth was too shy to talk to the star, who sat smoking a cigarette. Then Harry Belafonte got in.