You may think this has something to do with the recent arrest of Ratko Mladic, but Chaz Wood started it. In his book review post yesterday, Chaz mentioned a scene in one of his own novels (Maranatha

), a scene of disturbing violence set in a Serbian church. This made me realize that in 2 years of blogging at Pagan Spirits, I had never specifically addressed The Yugoslavian Thing. I'm shocked by this.

Do I have a fascination with the former Yugoslavian republics in southern Europe? Absolutely. Observe only this dream I recorded in my journal in February 2010:

"I dreamed my husband and I went to see a movie called Yugoslavia! It was sort of like Borat in reverse, with a couple of clueless Americans dropped in the middle of the former Yugoslavian cultures. It starred Will Ferrell as a man who, as a child, wrote on his to-do-before-I-die list that he wanted to visit Yugoslavia. As an adult, he went to start doing the things on his list, and he was severely disappointed to find out there wasn't a place called Yugoslavia anymore. He decided to visit Slovenia, Croatia, Bosnia and Herzegovina, Montenegro, Serbia, etc., with his best friend, played by Hugh Jackman. (That's a Hunk du Jour link. You're welcome.)

"Hugh was a Croatian-American. He was trying to get a woman (played by Brandy Norwood) to go out with him, but she wouldn't unless he knew something about his Croatian heritage. They were the romantic subplot, and in the end, she went out with him. Meanwhile, the Will Ferrell character somehow ended up playing basketball for Serbia in the Eurobasket, with comedic results. There was a cameo by former Chicago Bulls player Toni Kukoc, who made a stirring speech about playing in the Olympics for Croatia and how all he wanted was to buy his mother a car."

One of my favorite books EVER is Pretty Birds by Scott Simon, in which both Toni and his Serbian/Laker rival Vlade Divac are mentioned. (If you dug the men's NBA in the 1990s, you may vaguely recall the Lakers traded Divac to Charlotte for the rights to draft Shaquille O'Neal. Divac and his best pal, half-Serbian/half-Croatian baller Drazen Petrovic, were separated by the war; Petrovic died before its end. Their sad bromance is the subject of the ESPN film Once Brothers.) Simon's teen heroine, Irena Zaric (a Muslim girl from Sarajevo) has a crush on Toni. Me too! Irena's story is incredibly violent, disturbing, sad...and funny. That book is surprisingly funny.

I'm neither Serbian nor Croatian, so why am I so fixated? Because I went to high school with a guy from Sarajevo. In the '90s. While the war was actively going on. He had a Serbian dad and a half-Muslim, half-Croatian mom. They were stuck in Bosnia while he lived with foster parents. I'll never forget the experience of sitting through Schindler's List with him...an experience I translated into fiction in I Made Out With a Teenage Communist!

So that's the Yugoslavia thing. Will Ferrell, you're welcome to steal that dream and make the movie. 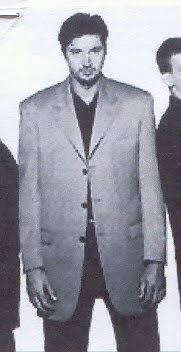 (You can't tell from this picture, but Toni has the HUGEST feet on earth.)
Posted by Erin O'Riordan at 12:50 PM