Again With the Vampires! This Time, It's 'The Vampire Diaries: The Awakening'

I’m usually good about reading a book before it’s turned into a movie or TV show. I read Harry Potter and the Sorcerer’s Stone before the first movie came out, Chamber of Secrets shortly before it came out on film, and the rest of the books long before they made it to the big screen. I was a fan of Sookie Stackhouse and had read all but the latest two of Charlaine Harris’s books about her before tuning in to the True Blood TV series. I read Twilight before it was a movie, then read New Moon, Eclipse, and Breaking Dawn in a mad reading binge before I’d seen a single preview of the New Moon film. 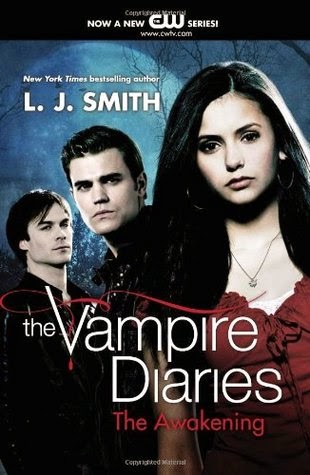 When it comes to The Vampire Diaries, though, I dove into watching the TV series while barely aware of L. J. Smith’s books. I knew nothing about Elena Gilbert or the Salvatore brothers before I tuned to for the premiere.

I’ve finally gotten around to reading the first book in the series, The Awakening. One of my FaceBook friends warned me the books were nothing like the series. I was rather skeptical about that; how different could it really be?, I wondered. My skepticism was misplaced. The book is very different.

On TV, Elena has striking dark hair and brown eyes, as does her historical, vampire counterpart, Katherine. In the book, Elena and Katherine are blondes with lapis lazuli-blue eyes. The setting of the show is Mystic Falls in New England; the book is set in Fell’s Church, in the South*. TV Elena has a teenage brother; book Elena has a four-year-old sister. TV Aunt Judith doesn’t have a boyfriend; book Judith is engaged to a guy named Bob. Bonnie is different: African-American on TV, she’s a small, white girl with curly red hair in the book. The character of Meredith didn’t even make it onto the screen.

The biggest difference, though, has to be in Stefan and Damon Salvatore. On TV, they were born and raised in Mystic Falls and became vampires in the Civil War era. Perhaps this was simply a bit of True Blood rivalry, though. In the books, the Salvatores are from Italy and much, much older. The acquired their supernatural powers during the Renaissance.

I don’t particularly like Elena Gilbert. She’s a silly, shallow, self-centered creature, the sort of stereotypically pretty, popular teenage girl who makes real teenage girls blush with shame. The TV version of Elena is the same way, but the book takes the stereotype a wee bit further by making her a Southern girl. Elena Gilbert is actually the vacuous ice princess Scarlett O’Hara (who was actually quite intelligent, but played dumb to attract boys) was pretending to be. Compared to Elena, Scarlett is a Jimmy Carter-esque humanitarian. Much ado has been made about Bella Swan’s helpless, self-destructive behavior in Stephenie Meyer’s Twilight series, but Elena could wear that crown just as easily.

Nor is L. J. Smith’s writing style a particularly literary one. She can be forgiven for this, perhaps, because she’s writing for a young adult audience. The easy-breezy, fashion-mag tone of the book is ill-suited to its dark subject material. It’s like Elena mistakenly fell off the cover of Teen Vogue and into a pulp horror novel. For readers with more sophisticated tastes, this will hardly do.

Still, there’s something intriguing about the storyline that keeps me from wanting to give up on this entire series. Sure, Elena is dumb, and Damon on paper is as detestable as he is on TV. The beating heart of this vampire series, ironically, is Stefan. Like Edward Cullen, he’s a vampire “vegetarian,” preferring to hunt animals rather than people. Unlike Edward, he makes an occasional slip. He has all of Edward’s Byronic, tortured mojo without Edward’s unfortunate, stalker-ish tendencies. He’s the bad boy, but the question here is not whether the girl with a heart of gold can save him, but whether he can save the girl with the heart of nothing.

*In fact, they're both set in Virginia, an error I'd realize when I read the second book in the series. Also, in the TV series, Judith's name is changed to Jenna.

The First Bite Is the Deepest by Elisa Catrina. $2.99 from Smashwords.com
“Funny and clever and emotionally hard-hitting” "A perfectly creepy read." Elisa Catrina's debut novel begins as a quirky send-up of vampire romance, but quickly turns sinister. High schooler Stella Ortiz starts dating the mysterious new guy, but her friends are convinced he's bad news: Sebastian misses tons of school, he day-drinks something that smells like pennies, and oh yeah, he's a vampire.
Posted by Erin O'Riordan at 8:26 PM