What I liked about this book: In Sara Benincasa's young adult retelling of The Great Gatsby, Nick Carraway's stand-in is Naomi Rye, the Chicago-bred daughter of an upwardly mobile cupcake magnate who now summers in the Hamptons. (Rye - caraway seed - get it?) Her Gatsby is her mother's mysterious next-door neighbor, Jacinta Trimalchio, rarely seen in public but famous in the fashion world for her high-end style blog.

Jacinta's Daisy Buchanan is aspiring supermodel/congressperson's daughter Delilah Fairweather. Delilah and Jacinta were friends in primary school, then drifted apart, only to reunite in a flower-filled room in Jacinta's mansion.

They become a couple even though Delilah has a boyfriend. The Tom Buchanan of this story is Teddy Barrington, who was a child sitcom star. Teddy's Myrtle Wilson is a waitress named Misti, and Misti's George is a bartender named Giovanni.

Having some of the characters in this American classic be gender-swapped was a refreshing twist on an old favorite. Nice touch: Naomi spends an afternoon reading Save Me the Waltz. Benincasa doesn't mention the author's name, but the "old novel" happens to be the only extant work by Zelda Fitzgerald.

What could have been improved about this book: F. Scott Fitzgerald's writing in The Great Gatsby is so literary it's almost poetic. Fitzgerald's wistful, thematic prose has here been replaced with nuts-and-bolts storytelling that's not quite as much fun. Benincasa's narration in the voice of Naomi is rough in some places, inelegant in others, and downright clunky in some spots. Places where the narrator seemed much older than her supposedly 16 years, where she said things only us grown-ups would say, took me out of the story. 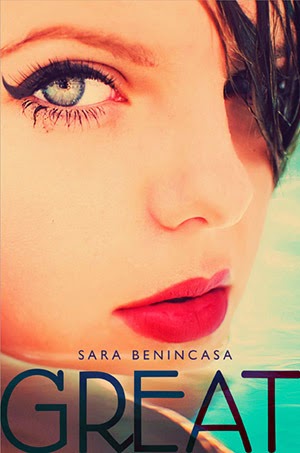 Not great: As narrator, Naomi refers to boys and girls as gay and to girls as lesbian. She seems to think Delilah's relationship with Jacinta makes Delilah a lesbian, but obviously that isn't necessarily the case. She's been in a long-term relationship with Teddy for years, so Delilah seems to be bisexual/pansexual. While it's not a requirement for every person to wear his or her sexuality label on his or her sleeve, it's not acceptable to pretend as if gay/lesbian or straight are the only sexualities that exist. Say no to bi erasure, kittens.

Overall, this was a fun book because of the thrill of the familiar, beloved classic American novel, combined with a new setting and new personality traits among the characters. If you haven't read The Great Gatsby but you saw the Leo movie and liked it, you'll probably think this is a pretty good book.

P.S. I looooove the Leo movie.

View all my reviews on Goodreads. I received an ARC of this book free from Amazon Vine in exchange for a review. This review represents my own honest opinion.
Posted by Erin O'Riordan at 12:00 AM