Thoughts on 'After Dead' by Charlaine Harris (Sookie Stackhouse #13.5)

After Dead: What Came Next in the World of Sookie Stackhouse by Charlaine Harris

I checked this book out from my local library, unwilling to pay for a book that's mostly blank space and pictures until after I'd given the text a chance. I've been a very loyal reader of the Sookie Stackhouse series, starting around 2005 or so when my mom loaned me the first book. I read this in about an hour, sitting in a restaurant waiting for dinner while my husband watched college football.

Although I've read all 13 books, I have to admit I don't remember a lot of the minor characters, so a lot of the entries in this reference book didn't mean anything to me. That will be frustrating to anyone who's a more casual reader and not an obsessed fan.

It is good to know a bit more about the fates of the main characters: Sookie, Sam, Eric, Bill, Jason, Pam, and Alcide. The information isn't very detailed, but at least it gives you a general idea of who lived happily ever after. 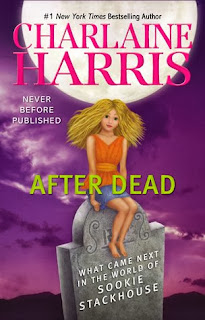 Hint: Sookie and Sam do.

Some of the entries show signs of what I'll generously call unpolished writing, and that too is frustrating. Harris has an unpleasant habit of telling us about a misfortune that occurred to a character and then making us infer from context that the result was death. Was it really so hard to say that so-and-so died? Clearly she has no qualms about giving her characters horrid endings, yet she can't seem to bring herself to come out and say so blatantly.

Hardcore fans may enjoy the information found in these pages (200 pages, with about 30 pages of actual text), but the average reader isn't going to enjoy this book.

On the bright side, the entries for Barry the Bellboy and Quinn seem to imply that these characters will get some kind of spin-off or sequel. The Quinn illustration was actually my favorite page in the whole book. 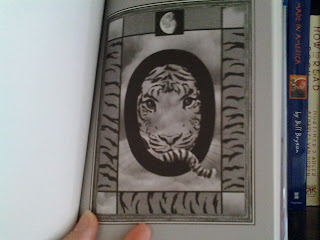 View all my reviews on Goodreads
Posted by Erin O'Riordan at 12:00 AM