Easter Sexcerpt: From "Jesus and Mary Magdalene: Partners in the Hieros Gamos" (A Heretical Love Story)

In last year's Epic Easter Post, I brought up a certain book. That book was A Woman's Journey to God, written by Joan Borysenko, Ph.D. I love this book, and I recommend it for any female reader with spiritual leanings. (Atheistic women can safely skip this one, unless interested in reading it from a sociological/folklorical point of view.) 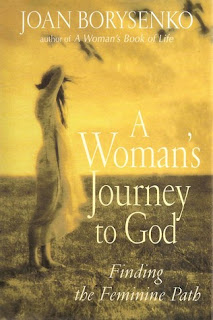 Part of what Borysenko does in this book is create for herself - and for anyone else who's willing to play along - a matriarchal women's mythology to complement the traditional patriarchal religious stories passed down through the Bible and other Judeo-Christian sources. Borysenko's inspirations include Margaret Starbird's The Woman With the Alabaster Jar, as well as non-canonical gospels, historical research and Holy Blood, Holy Grail by Lincoln, Leigh and Baigent. It's mostly Borysenko's storytelling from her own imagination, though.

"Jesus and Mary Magdalene: Partners in the Heiros Gamos" inside of A Woman's Journey to God isn't exactly a short story, but more of a long summary of the myth as Borysenko imagines it. I didn't own my own copy of the book last year when I wrote my Easter post, but I've acquired one since then, so I can share an excerpt:

"On the evening of the Sacred Marriage, Miriam was bathed in herbs from the ancient temple gardens, anointed with precious spikenard ointment, dressed in a simple shift of white silk, and left to her prayers. As the moon rose over the perfumed cloister, the Holy of Holies in the center of the temple, she knelt to pray. 'May this ancient act of Sacred Marriage, the holiest sacrament, repair the rift between God and Goddess. May the universe be made whole, and love restored to every human heart in our joining.'

"Yehoshuah, also dressed in a simple white shift, entered the walled garden and knelt before Miriam. Both were nearly breathless, shaking with anticipation of a ritual they had only dreamed of. Yehoshuah reached out, palms up, and took Miriam's small hands in his. A bolt of electricity ran through them as, looking into one another's eyes, they prayed.

"Together the Bride and Bridegroom poured seven crucibles of perfumed oil into an alabaster bowl. Each crucible represented a note of the scale that, when the notes came together, sings the universe into being. As Miriam and Yehoshuah sang each note, their voices rose through the still desert air, answered by a chorus of wild creatures...

"...Dipping their fingers into the bowl of perfumed oil they had consecrated together, each anointed the other in all their secret, holy places until the boundaries separating them disappeared, and flesh, once again, vibrated as primal energy.

"Miriam's lips whispered praises of God as she ran them over Yehoshuah's face, his neck, and his lithe brown body, hardened by physical labor in the desert sun. Yehoshuah's lips whispered praises of the Goddess as he kissed her delicate ears, the rose-petal tips of her breasts, the lips of her womanhood that are the portals of life. In the total joining of their hearts, minds, intentions, and bodies, the stars seemed to dip closer to earth...

"...Miriam brought her small hand up to the face of her beloved, brushing the wet strands of hair from his eyes. 'Tomorrow you must leave the temple,' she whispered. 'The time of your mission is upon us. For a moment the world was made whole through our love. Now you will teach people how to find their way back to that moment...The years of your ministry will be trying and short, my beloved, but I will always be there with you, by your side. Every pain is made bearable through love and understanding.'

"The two lovers were quiet, resting in both the joy and the sorrow of Yehoshuah's mission. The trees above them swayed gently in the warm breeze, breaking the moonlight into tender shafts that played over their naked, oiled bodies. Yehoshuah gathered Miriam's small form into his arms and loved her once again, the music of their joining spread throughout creation. Still inside her, he nuzzled her hair and sang to her from the Song of Songs, the ancient Scripture of the Sacred Marriage. 'Behold, you are beautiful, my love; behold you are beautiful, my beloved, truly lovely. Our couch is green; the beams of our house are cedar, our rafters are pine.'"

The Song of Songs in the Bible (traditionally read in its entirety on the Passover Sabbath in some Jewish communities) is one place that this ritual poetry of the sacred marriage is recorded; other Near Eastern examples also exist. Pasted into one of my scrapbooks, I have a clipping from a magazine called Common Boundary dated March/April 1994. (Common Boundary, a magazine of the intersection of psychology and spirituality, doesn't appear to be published anymore, but the library catalog website OCLC WorldCat shows some libraries have it in their collections.)

The clipping reprints an English translation of the text of a hymn written by or at least sung by a priestess of the goddess Inanna to her reigning (Sumerian) king, whose name was Shu-Sin. The priestess's name may have been Kubatum. The hymn reads, in part:

The clay tablet on which this poem, sometimes considered the world's oldest known love poetry, is written in cuneiform resides in the Istanbul Museum of Archaeology. Shu-Sin is a historical king of Sumeria and Akkadia who was known to have reigned from about 2037-2029 BCE, during the third dynasty of Ur. Since the Sumerians celebrated the sacred marriage of their king to the goddess Inanna at the spring equinox, that would make the sacred marriage - and its poetry - at least a 4,000-year-old Easter/Passover/Ostara tradition.

The baking metaphor, the pounding of flour and honey into a vessel - why does that sound so familiar? Ah, yes...